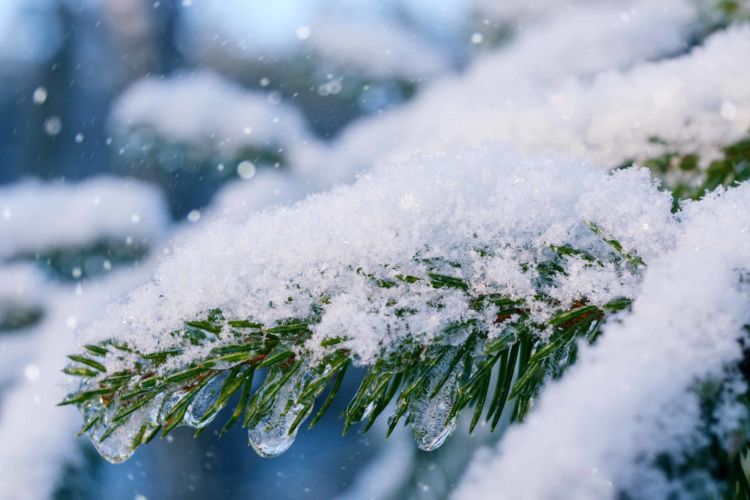 Fossil records tell us that about 250 million years ago, trees were not able to live at temperatures below zero. It was only adapted to live in the tropics where it is always warm, the water is always liquid, and the leaves are safe year round without fear of frost.

If you took a tropical tree, whether ancient or modern, and moved it to Siberia or Patagonia in winter, its water would freeze into sharp edged ice crystals. They would fatally puncture the living cells in all of the tree's leaves. This is the same thing happens to lettuce and spinach when you freeze them.

The cold weather means that the water in the trees plumbing system freezes. Dangerous bubbles form in the ice from gases that was previously dissolved in the liquid water. The ice itself does not cause much harm. However, when it thaws the water remains, which is a problem because the entire plumbing system relies on the intramolecular attraction of water molecules pulling each other upwards against gravity. Air bubbles break the chain of molecules essentially shutting off the flow of water.

Trees solve the first problem before leaving hot climates, because air bubbles also are a problem during drought. When plants are working hard to get water from the soil, their water conducting pipes accidentally absorbed very small pockets of air from the surrounding tissue. To combat this, trees in the dry tropics developed skinnier pipes, which, thanks to the counter intuitive physics of bubbles and water, develop fewer bubble blockages than the wide high capacity pipes of their wet tropical cousins. Therefore, the plumbing of ancestral drought adapted trees was accidently pre adapted to the cold as well. This adaption occurred well before the trees began to spread beyond the tropics.

Upon arriving in cold places, trees developed two techniques that they still use to avoid frozen leaves. The first is to fill the living leaf cells with concentrated sugary sap, which is the biological version of anti-freeze. Some trees, mostly evergreen conifers like Pine or Spruce, use solely this technique and keep their needle like leaves unfrozen year round with their super strong anti-freeze.

However, some other varieties, such as maple, birch, and larches, combine a less extreme level of sugar in their leaves with a practice of going leafless during the winter to avoid foliar frostbite. These techniques are uniquely cold beating adaptations. That is until the decedents of leaf dropping trees made it back to the dry tropics, where their strategy helps them deal with the extended seasons of drought monsoonal climates.

As far as we know, sugary sap remains the only adaptation that is only useful in cold places. Which is why you have to come to the north if you want to tap into the sweet anti-freeze that might just help you survive the winter. We call it Maple Syrup, and it is delicious.

Trackback specific URI for this entry

The author does not allow comments to this entry